I left North Carolina, it was a short but great visit.  There was a tremendous showing of support there that would follow me through to my next destination, Philadelphia. This would be my first time back since I left the previous November.  It was now the first of June.  My brother lives between NC & Philadelphia, and his son happened to be visiting - so I made a point to stop by for an overnighter.  The topic of hood ornament came up over breakfast, sooo.... 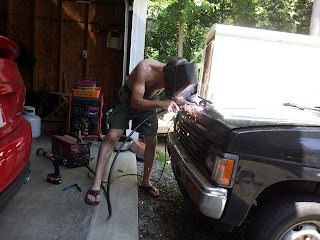 By the way, I'm not always this safety conscious! 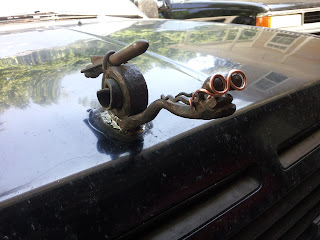 Meet Speedy.  He is a flying snail puppy born without wings in 1999.  He developed a rocket pack in order to keep up with his family as they would fly around with their naturally developed wings.  He was one of a series of pieces made when I worked for Greg Leavitt 1999-2001.  The puppies were something that Greg made periodically, and I happened to be there for this batch - one joke led to another & Speedy was born!
With my mascot finally attached, off I headed.  We had a workshop planned for East Falls Glassworks, another along the lines of what I have done before, but no takers.  Fortunately, I had had a couple of conversations with Nikolaj Christensen (manager extraordinaire) about this prior to my arrival, and he set up a series of shorter lessons for me to teach.  This was a combination of some of the folks that I had as regular lessons prior to my departure, other regulars who had an interest in what I am up to, as guest teacher for beginning classes, and instructor for some newbies.  All in all I had a very busy schedule for five days made up of 2 to 3 hour sessions.  Perfect.  This new model seems like a much better direction to go in with the public access glass studios. This is really the type of thing I would like to develop in other locations as well. Shorter lessons & a variety of experience levels.
Being back in the city that took so much for me to leave, a lot of strange things happened, psychologically.  I finally straightened out things with my old studio (I was still on the lease up until this point - a major stress).  I had this nagging fear that I was not going to be able to leave, that I was somehow going to get "stuck".  I started to feel strange stresses of the stuff that I left behind there, the ghosts around the corner, so to speak.  I tried out a couple of the old patterns just to see if they still fit - which of course, they didn't.  This intense manic feeling came over me. The oddest thing to me was that I tried to see everyone that I knew, and actually made plans to be in different places with different people AT THE SAME TIME!  I'm still not entirely sure about what was going through my head, I know that I am past that now, and that it won't happen again. Whew!  I didn't take very many photos, but here are some that I did take - Click!
I left town relieved, but a little confused.  Enter one of the blessings of the Road.  Lots of time alone to think about it & sort it out.

On The Corner of Greensboro and Main

North Carolina would have a whole lot more in store for me, though I hardly knew it at the time of my arrival.  A friend from Junior High - one of the first folks I became friends with when I moved from Oklahoma to Gettysburg at age 13 - happened to live in the Chapel Hill area.  We both knew that we were in the same general area, but had no specific meet up plan as of yet.  The Friday afternoon, prior to visiting the scrap yard, I decided to head in to Carrboro to see if I could find a Ma Roller somewhere. Seemed like a reasonable idea.  Checked a couple of places out, no luck, I'll try around the corner.  As I turned the corner of Greensboro and Main, I ran directly into my friend!  It had been something like 19-20 years since we last saw each other.  The folks from those days that I have been running into and visiting lately are the kind of friends that you pick up right where you left off, like no time had passed.  There is a connection that runs deep beneath the surface, and like the chance meeting long ago, here it is again.  We caught up a little & decided to get together later on in the little village of Saxapahaw where she lived. 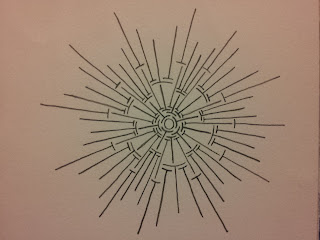 I continued my search for the Ma Roller to no avail, but I did end up with a hacky-sack.  The Roller would have to wait.  I rejoined George-ann & Charles, we did our trip to the scrap yard, set up for the workshop, and went to an opening for "Transforming Light" at the Hillsborough Art Council Gallery.   The show was a beautiful combination of glass sculpture by Lucartha Kohler, and amazing watercolors by Ginny Runge.  Afterword we all went to meet up with my friend.  Another chance meeting here would develop into a powerful connection that would prove to be trans formative.  I think we all have places in the world that we are drawn to by a force greater than us.  We appear in these places at just the right time.  We know the moments are significant, although we may not understand why or to what degree.  Most people tend to attach a bit of dogma to this, see things as God's will, etc.  I see it more of just being open to universal energy.  Serendipity.  Believing that what you need will present itself when you need it - providing you are open to it, are true to yourself & have faith.
Posted by Phil Vinson at 11:39 AM No comments:

My next gig would be in Durham, NC, at Liberty Arts.  This is a terrific group of artists of various disciplines including metal forging, fabrication, casting, woodworking, ceramics and glass - all housed in a massive warehouse space.  Their space is in the same building complex as several rehabbed manufacturing buildings called the Golden Belt.  There are "quiet" & "clean" studio spaces (mostly painters) as well as apartments, a coffee shop, galleries, and other creative businesses in the complex.  I have seen this type of development in various places around the country, in many occasions, the developers spike the prices once the places become popular, often forcing out the tenants that make these destinations popular to begin with!  I have never quite understood this mentality, hopefully that will not be the case here.  It seems to be very well done.
The glass studio is just getting started, and I was invited out to do a workshop & inject a little fresh energy into the mix.  The folks here I have a bit of history with.  Paul Vernon is the owner, and George-ann Greth is developing the teaching/community outreach program. I have worked off and on with George-ann most of my glass career - she was my first teacher - and we worked together for over a decade on a variety of projects.  Paul has had a small "weekend warrior" shop in Durham for many years in various locations.  He was also one of the students in the first workshop at East Falls Glass in October 2011.  I have always enjoyed this part of the world, and have worked in Paul's former studio on several occasions.  I was thrilled to be invited to participate! 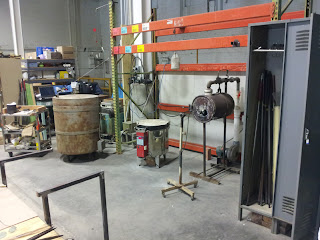 The workshop structure would be somewhat loose, a couple of folks could only come by for some of the time.  Charles & George-ann and Paul would ultimately remain the only constants.  We made a trip to the local scrap yard on Friday, where I found a cool bronze drain to use as a blow mold.  "Readymades".  The next day we went to the Scrap Exchange next door, to look for more readymades.  There were a few plaster molds I couldn't resist, that were originally created for ceramic slip casting.  Hard to pass up a mold that has the title "Stuffy Sleeping Bunny Feet" written on it in marker! 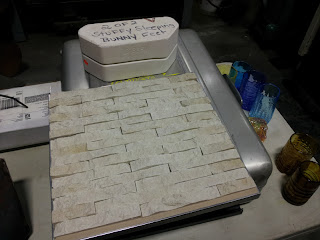 Though I was only in town for a few days, we made the most of it.  Charles concentrated on a wet clay & bamboo mold - the bamboo was quite gnarly & made a beautiful pattern.  I went with the Readymades & found objects.  I have had this idea for removable inserts for the "Tripentahedron Vase" mold for about 10 years now and have never arrived at a design that I like - until now.  There was a pallet of funky stuff that we could pick from.  I found these three scraps of steel with an identical cut out on each.  Charles instinctively placed them in the mold - perfect fit & pattern for the idea!  I love it when that happens!
George-ann had the most twisted idea - she had been freezing a package of uncooked "chicken paws", which she wired to the inside of a perforated cage.  The concept was pretty great, and the imagined object even better.  For some reason I was expecting this to smell like grilled chicken, you know, like a barbecue.  NOT THE CASE!  Seared flesh. One of the nastiest smells & I got a hefty whiff of it, since I was blowing out the mold!  We only blew that one once. 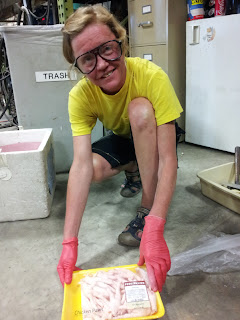