The summer was pretty amazing - in many ways.  There was a lot of reflection, soul searching, heart ache, and joy.  Oh, and it was HOT! Record temps in Durham when I was there - like 108!  Left that to Oklahoma's 119!  Dry heat is still f-ing hot & there IS a major difference between 100 and 120, trust me! Anyway, I digress.  Typical of the Oklahoma born male to  revert to weather talk to avoid serious conversation.... 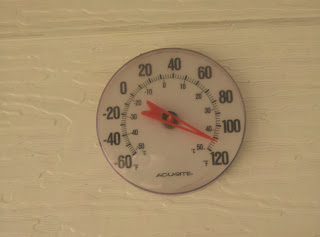 Much happened personally, I finally opened up & let some shit go that had been standing in my way.  Re-evaluation, if you will.  Looking some of my big issues in the face.  Feeling more empowered about where I am in life.  Patterns of behavior that need to change if I am ever going to move forward.  I started to feel a need to sit still for a bit.  Sometimes feelings appear while travelling down one path, then suddenly the path takes a completely unexpected turn on you. That feeling stayed true, but my sitting still did not happen the way I thought it was going to.
I ended up at my sister's place in Gettysburg one evening.  She had mentioned in an email that I was welcome to come and stay for however long I needed to rest and patch my bones.  Boy, did I need it.  That day at the spa in Hot Springs Arkansas did not cut it (BTW, I highly recommend visiting Hot Springs Arkansas - that water is Amazing!).  I arrived in Gettysburg with it in my mind that I was going to hunker down & home base it for like a month at least.  There were a couple of opportunities that had presented themselves since GAS, and I needed something to do to fill in the gaps.  Not to mention I sort of had the wind knocked out of me a couple of times recently, and just needed to take a break! 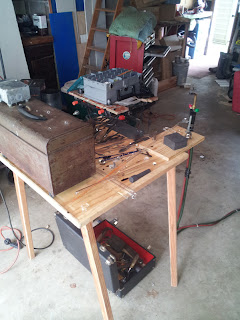 I set up my portable lampworking rig in the garage, so my nephews and I could screw around with it, and proceeded to visit long standing friends and family.  The second day back involved getting lost in the woods  and then found again, with two of my best friends - like we used to do as teenagers.  At a certain point, I actually made plans to start working at a farmer's market, just give up on this whole thing altogether and go sell fruit.  That is when I received a message from the Tyler Alumni regarding the Art Market in early October.  It took me all of ten minutes to apply, so after that I called Nik at East Falls in Philadelphia to inquire about any possible gigs at the glass studio.  That was on a Friday.  He hooked me up teaching a Fun With Glass class on Sunday, and then a smattering of lessons throughout the week.  Back in the saddle again.  Whew, that was close!  Here are some pics from all that....
Posted by Phil Vinson at 6:22 PM No comments:

There's a Glory Hole to be Built!

Before leaving North Carolina in early June,  it was proposed to me that I should return after the GAS conference to Durham to help build some new equipment.  Originally, I was going to head out to Oklahoma and then back to Durham, but time and money were running a bit short.  So instead I aimlessly meandered South through Ohio and into West Virginia - into the town of  Williamstown.  A small sign lead me to the now closed Fenton Art Glass factory!  I had totally forgotten about this place.  Sad to see a place that has been around for so long no longer in business.  Right around the corner is the Gabbert Cullet company, who we used to get all of our cullet from in college.  Cullet is the name for scrap glass that can be remelted & used.  Theirs was the best.  I remember shovelfuls of little clear teddy bears and angels being thrown into the hot furnace!  We used a bit of their color too, the red was beautiful, as was the crazy carnival glass fabrine blue, and the peachblow...that was weird stuff.  They also had this fantastic striking opal, that would fade from opaque white through blueish white into clear. 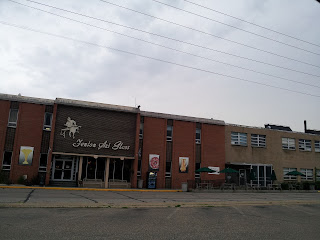 How strange to just happen upon this place after just attending the GAS conference.  I suddenly remembered another - Blenko!  I now had a plan, or the next destination, at least.  Stayed over in the parking lot of a fancy rest stop near Milton, WV.  First thing in the morning, I was at the Blenko Factory.
Blenko is one of my all time favorites.  They do a lot of mold blowing, and have had some pretty fantastic designers in their day.  They have this water bottle that was designed in 1938 and is still in production.  One of my all time favorite glass objects. 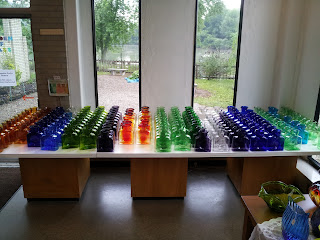 A table full of them!

I spoke with the shop manager - I will admit, I was trying to get my foot in the door to be a guest designer - I think some of my designs would fit nicely in their catalog.  We had a great conversation about glass and the intricacies of dancing with the stuff.  I would really love to hang out at the factory some day & make some glass with those guys.  Unfortunately for me, they were not blowing that day, but casting billets for Dalle de Verre, which turns out to be one of the reasons they are surviving.  They also make rondels for stained glass windows, which is another item that is rare to find.  They have a scrap yard of colored glass that is for sale. 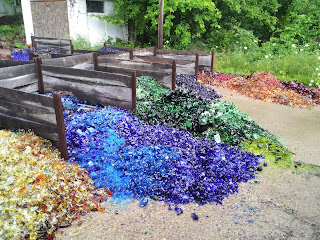 I ended up purchasing some cullet at 50 cents a pound, I'll take some red, thank you very much! 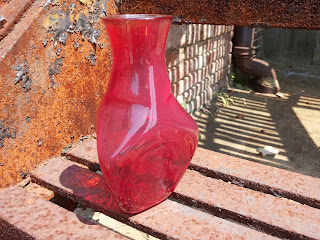 This is the piece I made later on with that red.

Made it to Durham the next day, about a week ahead of when I was expected.  All good, my friend Paul is pretty laid back and open about visitors, I was welcome to chill.  The main project was to build a new glory with a 12" opening, using primarily the materials that Paul has been accumulating over the last couple of decades.  This is my style of equipment building!  Use what you have on hand, and adapt it to your needs.  I have put together a slide show, at this link, of the construction process.
All in all I stayed in the area for about 4 weeks. I threw in quite a bit of pleasure with the work - much needed after the previous summer (I spent most of that preparing to leave Philadelphia).  I checked out a fair amount of Central NC, as well as an unforgettable camping trip to the ocean.  My second time ever to the North Carolina beaches, I highly recommend!  It was a blissful month, one that I am so very fortunate to have experienced.  I was reluctant to leave, so I made plans to return after visiting my father.
Posted by Phil Vinson at 9:01 AM No comments: