It had been many years since I have attended a Glass Art Society conference.  My first was in Tuscon in 97.  There have been a few more, Tampa, Seattle, Adelaide Australia, St Louis & Pittsburgh.  I have been talking the Toledo conference up during all my travels.  And it finally arrived.  About a week prior to the conference I realised that I actually could not afford the admission fees.  Nonetheless, having attended previous conferences, I knew that there would be lots of activities going on that I could check out without actually attending the conference.  I will admit that it was a strange experience.  Sort of an outsider feel.  I came upon this sculpture at the ballpark downtown, and it sums up what it felt like! 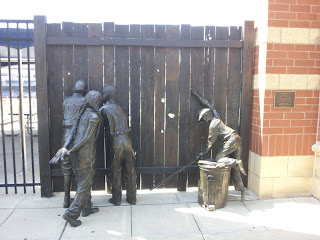 But everything happens as it is supposed to, and for a reason.  I spent a lot of the time checking out the city, galleries & museums.  I ran into some friends from River Falls in the first couple of hours - some of the students that had participated in my demos last November, as well as Eoin Breadon & his family.  I attended a great party the first night at Firenation Glass Studio & Gallery where I met a few new & a few long standing friends.  I found out that Eoin would be demonstrating the next day at a venue that I could actually attend - I was pretty psyched.  It would take place at a mobile studio on the back of a box truck, located in a parking lot.  The truck belongs to Neusole Glassworks and wasn't part of the formal GAS agenda.  Sounds just about right.  His demo was a blast to watch, and a great way to spend an afternoon.

The last day of the conference,  the students from River Falls gave a kick-ass demo at the Glass Pavilion at the Toledo Museum of Art.  This would be the one time I bent the rules a little & snuck in to watch.  The demo was beautifully coordinated, and well practiced.  Everyone worked together well and the piece went very smoothly - they created a blown & sculpted Falcon in a Nest.

The one big deal at the end of the conference is the party.  It is included in your conference fee & is historically awesome.  I wanted to attend, but could not justify paying the equivalent of several tanks of gasoline for a few hours of partying with folks.  The networking was over at that point, and that would really be the main reason for attending.  I was actually gong to leave town before the party started until I received a  phone call from Eoin.  He had been talking with Jason Chakravarty from Neusole Glassworks.  I met up with them.  Jason asked me how I managed blowtime to make work, seeing how I am travelling all the time.
"Do you Poach it?"  This is probably one of my favorite questions I have been asked.
"Sure, man. Why do you ask?"
"There is a furnace on the back of a truck with about 50 lbs of glass in it that needs to be emptied"
"When?"
"Right Now"
I followed them back to the truck in the parking lot & met the crew of the truck, Logan & Josh.  I pulled a bunch of the molds out of my truck.  Those who had not seen my molds before got pretty excited.  The guys gave me a studio orientation, and we started to play.  The River Falls folks all came by to watch, (and take some great photos, click here) as did a few other folks, it was nice to have the audience.
First up was with a blowpipe that my friend Chad recently custom made for me.  It is a shorty with a long head, designed for use with small furnaces where you gather out from the top.  The opening in the head is a bit larger, so it requires less pressure to inflate a bubble.  This pipe was originally designed for use with the boro furnaces I was playing with in Montana, but did not acquire it until my recent trip to Gettysburg.  The glass they were using on the truck was Bullseye, which I had not blown since 1995.  Turns out it was great for mold blowing!  There are a few items left from this session available on my Etsy Store (Click Here).
I must say it was a beautiful evening for blowing glass on the back of a truck.  The sun set in front of us, and as it grew dark, we worked by the glow of the glory hole & the ambient light of the street lights.  A block away in view, there was a wedding reception at a restaurant, the well dressed attendees would periodically stroll over to see what we were up to.  Others would come and go, and for our final feat, all three of us blew into different molds at the same time & stuck the strange glowing shapes together hot.
I came to Toledo to network, although I did not make a large Quantity of connections, the connections I made were very Quality ones!
Posted by Phil Vinson at 3:41 PM No comments:

My friends Andy & Cheryl (the Bozemanites who took me in) were married (I was a groomsman - the primary reason for heading East) in Delaware, it was a lovely time.  I lived with those guys through the planning stage, so it was nice to make it through to the wedding & and see those plans realized. 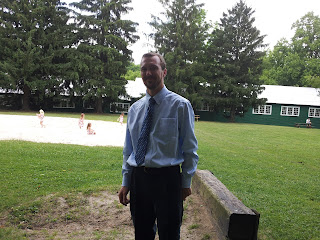 That weekend also happened to be my nephew's high school graduation.  I was so very glad to make it to the party.  He was born my first semester at college.  He is half my age.  Thinking about it in those terms is kind of a smack in the face - not that I would really want to be 18 again.  In many ways I don't feel any older now than I did then.  This aging thing is getting really weird...
The return to Gettysburg was great, I had an interesting interaction with a couple of young kids at the Lion Potter.  Absolutely beautiful work, I do my best to stop in when I am in town.  On this particular day, there were some small pieces that caught my eye, made by the owner's children.  I decided to see if they would be interested in a trade - I pulled out a suit case of the little bowls & had a terrific time looking through them and telling the kids the story of the 99 bowls show in San Francisco.  I now have two small ceramic sculptures mounted to the dash of the truck! I have this mini art collection happening on my dash - all very small pieces, it started before I left Philly with a little Cali Lilly painting...
Next stop was the Blue Brick Gallery downtown. As it turns out one of the members of the gallery is the Art teacher at Gettysburg High.  "You went to Tyler? So did I. When?"  "93-97" "You might know my brother then - Michael Thrush"  Michael was my freshman year roommate at Tyler School of Art!  It is a very small world indeed.
The next stop would be Toledo for the annual Glass Art Society Conference.  As this year is the 50th anniversary of the Toledo workshop that started the modern studio glass movement, I did not want to miss this one!  Back to the same path that I took last November.
Posted by Phil Vinson at 3:44 PM No comments: