I found myself in south western New York state.  When one is in these parts and has any interest at all in glass, Corning is a must.  It is one of the glass meccas of the western world and frankly, it had been WAY too long since I have visited.  As it turns out, I have several friends there - one of which I had recently reconnected with in Toledo.  That visit to Toledo turned out to be very pivotal, even though I didn't actually attend the conference itself!  It was exactly what I needed and when I needed it.  That is the way life goes, if you allow it to. That has been one of the toughest lessons for me to learn, but now that I understand and have succumbed to this truth, the world seems to open up as needed.
Jeremy and I have some history that goes back to former lives, and we hadn't actually seen each other since then.  He also attended Tyler, and worked at a manufacturing company in north Philadelphia, where I was a Project Manager. He had commented to me one day that he had never been West of the Mississippi, so I requested that he accompany me on my business trips out West.  He was a fantastic companion, as I had a tendency to get a bit manic, he would always remain steady, and keep me as level as was possible at the time.  He is now Technician and Teacher at The Corning Museum of Glass' Studio, and has a place just outside of Corning.  When I ran in to him in Toledo, he offered up, so being in the area, I decided to give him a call.
The Corning Museum of Glass is an amazing place.  The collection runs the gamut, I am a real fan of the super early stuff.  Egyptian, Roman, the stuff that was made way back in the day when glassblowing was Invented.  For the First Time. 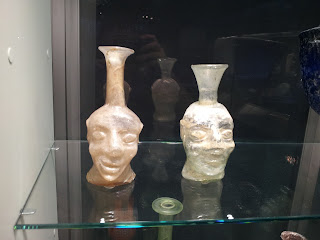 There is a fantastic collection of such objects at the museum.  Researched, restored & displayed to let you know where this all started.  Things were made two thousand years ago that would take a lifetime to recreate!  That is one of the things I love about glass (in case you are keeping a tally)  there are tools and techniques that I have learned, that someone discovered thousands of years ago. Without a Natural Gas pipeline. Or a welder. Or electricity. Fire, sand, and seaweed, man.  It is a healthy perspective on life, culture and society to trace it back to its Roots.  You have probably heard the phrase "It's all been done before".  Bare Naked Ladies wrote a damn song about it.  You go to the Corning Museum, and you see all those original thoughts you thought you had, that someone had a thousand years ago.  Then you bring that current, add the twenty years that I have been at it, watching how it has all expand exponentially even in that short time,  and it is a bit overwhelming.  It is pretty amazing to me that all these objects exist, and am grateful that they are preserved & presented in a way that is accessible to contemporary attention spans.  Here is a link to a batch of pics.  Be sure to read the captions!
I stayed for about a week - I originally planned on staying for just a couple of days - I was supposed to be in Cincinnati in early November, and didn't really want to jam up my schedule - but a couple of things came up.  Hurricane Sandy was one - as I had to pass through Philadelphia & Gettysburg on the way - I didn't think heading southeast straight at it would be the brightest move.  The second was that mid way through the week, Jeremy's teaching assistant for the weekend class had a schedule conflict, the position was in turn offered to me.  I am not the type to turn down an opportunity to teach, especially at The Studio in Corning! I managed to keep myself occupied between the museum, fireplace, pool table, great food, beer, company, and catching up on computer work, that the week flew by in a very pleasant manner.
I neglected to mention above that Corning has the Rakow Research Library, perhaps the most extensive collection of glass related materials in a single location in the world.  I didn't even go there....saving that one for another trip.
Suddenly, I am teaching at The Studio in Corning!  Pretty much all of the world renown artists who teach workshops have been affiliated with this shop at some point. You see that is the deal with taking a class at the Studio at Corning.   It is a beautifully equipped, immaculately maintained place to blow glass.  They don't mess around. Period.  Except for the messing around.  It maintains a balance between tight & laid back like no other place I have been to.  Which is why it was such a great thing to be invited to be there.  I was the Teacher's Assistant for the cane working workshop.  It was kind of great (aside from all the obvious reasons) for the role reversal, as Jeremy always worked for me in the past, and now I was working for him!  We had only been in the hot shop together once before, a really long time ago, and in our former lives.  He is a fantastic teacher, and we worked very well together.  The students were great, and we tried a couple of things that none of us had ever seen any one do before. Including this fun thing with a cordless drill attacking a cane pickup!  My visit ended with a few hours of blow time, where I got to pull out my molds and introduce everyone.  Wouldn't you know it, another long standing friend was blowing on the bench beside us!  It was a blast!
Posted by Phil Vinson at 10:04 PM