Corning was a lot of fun, I was totally inspired and could have stayed for another week or two at least, but I had this other thing going on.  Over the summer, while at my dad's place in Oklahoma, I sent an email to Jason Chakravarty, Director of Operations & Studio Manager at Neusole Glassworks in Cincinnati, OH, inquiring about their residency program.  He sent along some info & let me know that the residencies are typically scheduled about a year in advance.  The following day, I received an email, letting me know that he had met with Debbie, the director of Neusole,  and they decided to offer me a week long residency in November.  Right on my birthday!  Perfect, nothing better than blowing glass on my birthday!
I blew through Philadelphia, to pick up some color that had been delivered while I was rambling up North, then to Gettysburg, where I was planning to spend a couple of days.  Until Jason called - apparently there was a conference of Ohio State Art Teachers going on, and there were a whole bunch of activities in the studio - could I arrive a couple of days earlier?  Sure!  That put the kibosh on my Mom's surprise birthday party - which was such a sweet idea - and I was off again!
Drove through to Cincinnati the next day - I had never been there, and it was an interesting ride through West Virginia.  Jane (that's my GPS's name) took me on some back woods roads, which took a little longer, but made for some fun driving.  She'll do that occasionally, and she's fairly accurate. Except for the time she tried to send me across the mountain in Big Sky, Montana, where there was no road..... 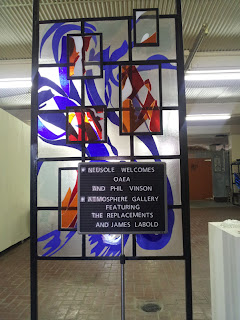 Neusole Glasworks is a very interesting place.  The space is HUGE, well equipped and expertly manned. They stay very busy with a variety of activities.  That has been an interesting thing about the travels and seeing so many different shops.  Each one has its own formula for success.  The whole deal for me was that I help out & teach pumpkin workshops for the teachers, do a big demo on one of the nights, and make as many tumblers as I can, and leave half of those behind.  Fantastic.  I had my own apartment while I was there - which was a REALLY big deal.  I hadn't had my own space in a VERY long time. Except, of course, the truck - a very small private space with big windows.
The workshops went off without a hitch & I must say that it was very impressive how Jason ran the shop. Logan, Nicole, Steve, Mike &  are all very professional & know what they are doing, it was a real pleasure to be able to work alongside these folks.  The second day into my stay was the night for the big demo.  We talked a little about it over the course of the day, with no real concrete plan.  There was a little bit of time before hand, so I went back to the pad & chilled out.  Changed into a dress shirt & tie - the tie was a gift from Ralph Harvey in Americus (I'll get to that story in a minute) - and headed back to the studio.  I did a chalk drawing on the floor describing the idea, with about 30 minutes to spare.  The piece would be a combination of parts blown into several different molds, and assembled hot to make this rocket ship sort of thing.  Steve had just enough time to get some practice blowing one of the molds.  Steve is a very skilled glassblower - and it was fun watching him figure out how to approach the piece.  Generally speaking, everyone touches on mold blowing, but not too many people take it where I do. 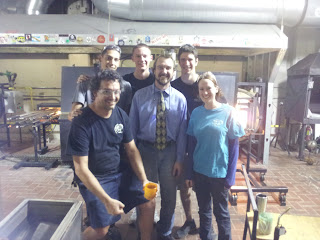 The demo was FANTASTIC.  Went off without a hitch, seamless.  Like I said, everyone there is a pro, so even though we had all never worked together before, we still all spoke the same language. The funniest thing for me was the Tie.  I don't wear them unless I am in a wedding or funeral procession.  Ralph Harvey wears one everyday. Whether blowing glass, or fishing, he's wearing a tie.  So on my last day in Americus this summer, I came into the shop and he was there, "I wore this tie in to give it to you - it looks like your work".  True, the pattern is geometric and is reminiscent of the stuff I like to make.  He took it off and I put it on. "You have to wear that during your demo in Cincinnati".  Okay.  Wearing that tie added a dimension and dynamic to the demo that I have not experienced before.  I did notice that I had much more interaction with the crowd - perhaps it was more of me putting on a costume, or a different persona.  I don't really know for sure exactly, but it did make for a couple of great photos!  Click here for a link!
So much happened this week. We went to some amazing restaurants and this great market - the spice shop is one of the best I have come across.  The experience culminated in the creation of my very first piece of neon.  Jason, as Angus Powers (see Roman Glasblowing post) puts it, "...is a wizard, Phil, a wizard!"  This is no joke.  Jason advised me on a piece, and attached the electrode this is done hot, just before the piece is put into the annealing oven - a very tricky move. We hung out the next day & bombarded the piece with neon gas, and electrified it!  Seriously, as if blowing glass is not magical enough, this takes it way over the edge!  There will be many things neon to come.....
My goal for the residency was to make cups.  That was the original deal, and I intended to stick to it.  I started out with some chain mold tumblers, to get the feel of the glass, the studio, and the help.  That went really well, so I moved on, and discovered new ways to use some of my existing molds, to create some really cool drinkers. I had a day to create some new molds from some fantastic new parts from my buddy Chad - I made three!  All in all, I made approximately 200 pieces and there were 6 new designs from that week.  Decent run, I would say. 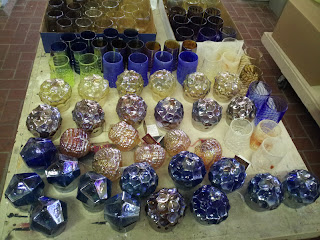 There are some of these pieces still available - you can get them here on my web store - Click the Tab at the top right.
I am very grateful to the folks at Neusole for the opportunity.  It was an amazing week and I was treated so very well.  It was a great opportunity for me to do new work, and I did my best to take full advantage of that opportunity!